14 days from Dubrovnik to Vienna

14 days from Dubrovnik to Vienna

Spectacular scenery, historical sights, and special experiences await you on this fantastic tour through Eastern Europe, including Croatia, Bosnia-Herzegovina, Slovenia, and Austria. Along the way, you’ll overnight in Dubrovnik, Split, Plitvice, and Zagreb in Croatia; Sarajevo in Bosnia-Herzegovina; Ljubljana in Slovenia; and Vienna in Austria. If you’re interested in historical sights and UNESCO World Heritage Sites, you’ll be thrilled on this Eastern Europe tour. Visit Dubrovnik’s Rector's Palace, a gothic-renaissance palace dating to the 15th century; the 4th-century Diocletian's Palace in Split, a well-preserved fortress and UNESCO World Heritage Site; the majestic cathedral in Zagreb, housed within a medieval fort; Mostar’s Old Bridge, built in the 16th century; and magnificent Predjama Castle, spectacularly built on a 360-feet-high cliff and probably dating back to the 12th century. You'll also visit stunning Kotor on the northern coast of Montenegro. This UNESCO World Heritage Site is nestled into the Bay of Kotor, also known as Europe's southernmost fjord, and has been protected by an impressive wall since the early Middle Ages. You'll enjoy a walking tour along its cobblestone streets—a unique experience offered by Globus. If you’re interested in beautiful scenery, this Eastern Europe tour will delight. In Croatia, you'll visit Plitvice National Park, a UNESCO World Heritage Site famous for its lakes, waterfalls, and forests. You'll drive through the loveliest part of Austria and along the Adriatic coast to the pretty coastal city of Zadar. You'll experience the beauty of Croatia's Dalmatian Coast, with dramatic limestone cliffs. You'll also visit the Postojna Caves, with its web of tunnels and stalactites, via mini-train—another special experience offered by Globus! These are just a few of the many highlights included on this magnificent tour through Croatia, Bosnia-Herzegovina, Slovenia, and Austria. It’s an once-in-a-lifetime vacation! 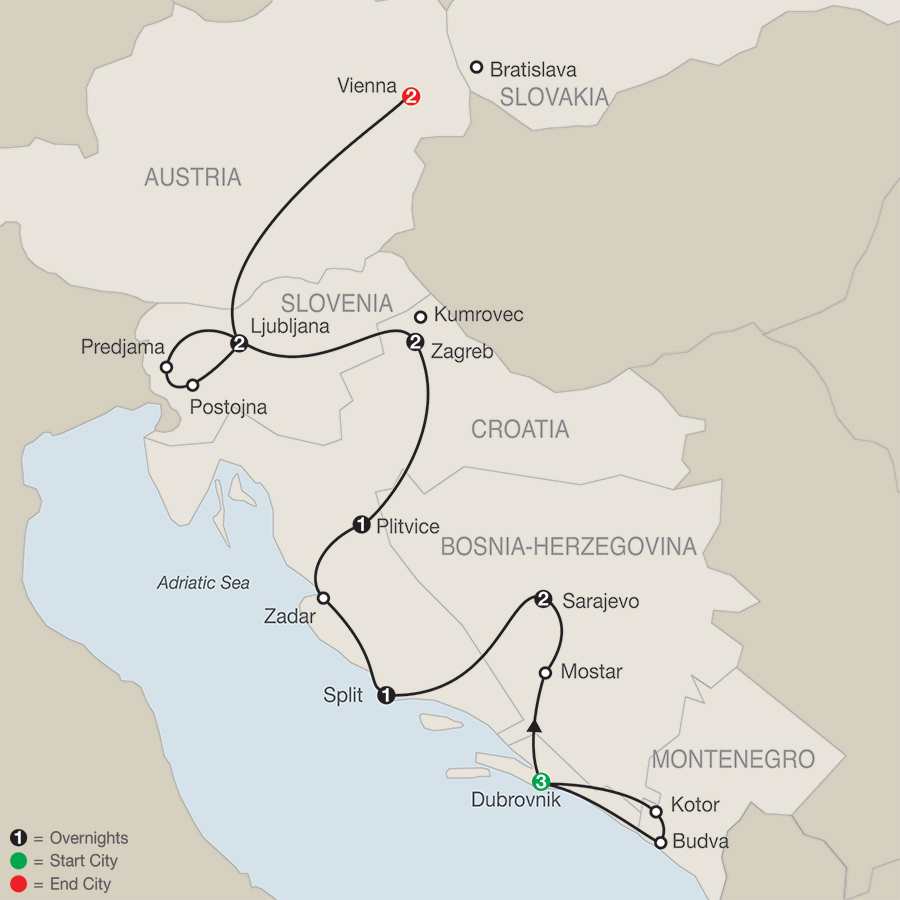 Motorcoach; mini-train. Free Wi-Fi available on your motorcoach and in most hotel lobbies.

Full buffet breakfast daily; 7 three-course dinners with wine, including a welcome dinner in Dubrovnik and special dinners in Split and Vienna

Arrive in Dubrovnik, Croatia. Welcome in Dubrovnik! At 6 pm, meet your Tour Director and traveling companions for a welcome dinner at your hotel.

Dubrovnik. Beautifully situated on a promontory jutting into the Adriatic Sea, Dubrovnik was once an independent maritime republic rivaling Venice. Enjoy a walking tour with a Local Guide and see the impressive ramparts, erected during the Crusades to protect the town against land attacks, and the Franciscan and Dominican monasteries. You will also visit the 15th-century RECTOR’S PALACE. Afternoon and evening at leisure; an optional boat cruise is available.

Dubrovnik. Excursion to Montenegro. A real treat today: [LF] first, visit stunning Kotor on the northern part of the Montenegrin coastline. This UNESCO World Heritage Site is fringed by mountains and nestled into the Bay of Kotor, also known as Europe’s southernmost fjord. Protected by an impressive wall since the early Middle Ages, the city has one of the best preserved medieval Old Towns in the Adriatic. Enjoy a guided walking tour along its winding, cobblestone streets and marvel at the picturesque squares and Romanesque churches. Later, continue to Budva, dating back to the 5th-century BC and considered one of the Adriatic’s oldest settlements.

Dubrovnik–Mostar, Bosnia-Herzegovina–Sarajevo. Enter Bosnia-Herzegovina and stop in the city of Mostar. Admire the OLD BRIDGE, the city’s symbol, ordered by Suleiman the Magnificent, the Ottoman ruler in 1566, replacing the older wooden bridge. Continue to Sarajevo, where the Olympics took place in 1984, and which is the second city in the world (after California) that owned an electric tram network.

Sarajevo. Hear about the assassination of the Archduke of Austria in 1914, the recent Bosnian War, and see the main sights with a Local Guide. Then, [LF] visit the SARAJEVO TUNNEL, built between 1992 and 1995 during the Bosnian War.

Sarajevo–Split, Croatia. Enter Croatia and travel south to the Dalmatian Coast and Split, the ancient Spalato, a UNESCO World Heritage Site. During your guided walking tour, learn about the history of this captivating resort and visit the labyrinth of 4th-century DIOCLETIAN’S PALACE, a well-preserved fortress and a living part of the Old Town. This evening, enjoy a special dinner with wine at a local restaurant.

Split–Zadar–Plitvice. Stay along the Adriatic coast and stop in the pretty coastal city of Zadar. Your Local Guide will tell you about the turbulent history of this city, fighting off the Venetians, crusaders, and Turks over the centuries. Turn inland and arrive in peaceful Plitvice for your overnight stay.

Plitvice–Zagreb. Time to soak in the pure beauty of the NATIONAL PARK, famous for its lakes, waterfalls, and forests. Then, head for Zagreb, capital of Croatia.

Zagreb. Meet your Local Guide and start your morning sightseeing, which features all important landmarks of the Lower and medieval Upper Town, such as the Parliament, Stone Gate, the Archbishop’s Palace, and more, plus a visit to the majestic CATHEDRAL. Exciting optional excursions are available to make the most of your stay, like an excursion to Kumrovec or to try out traditional dishes in one of Zagreb’s fine restaurants.

Zagreb–Ljubljana, Slovenia. Enter Slovenia and arrive in its elegant capital, Ljubljana. Sightseeing with a Local Guide features the medieval castle, the impressive City Hall, and a visit to magnificent ST. NICHOLAS’ CATHEDRAL.

Ljubljana. Excursion to Postojna and Predjama. Enjoy an unforgettable experience: first, [LF] visit the impressive POSTOJNA CAVES by MINI-TRAIN. The caves were discovered in the 17th century and opened to the public in 1819. Continue to nearby Predjama to visit magnificent PREDJAMA CASTLE, spectacularly built on a 360-feet-high cliff in the entrance of a cave and probably dating back to the 12th century. Hear about the knight Erazem Lueger, the “robber-baron” and most famous inhabitant of the castle at the end of the 15th century. Marvel at the renovated castle rooms, and see how well the castle was built in this unusual setting. The castle was featured in the movie Armour of God with Jackie Chan.

Ljubljana–Vienna, Austria. Leave Slovenia and the Alps behind you and drive through the loveliest part of Austria. Cross Semmering Pass and arrive in the capital, Vienna. Meet your Local Guide and start your sightseeing, including a drive along the elegant Ringstrasse. Pass the impressive State Opera House, the Jewish quarter, and stop at Hofburg Palace, winter residence of the Austrian imperial family. Marvel at the impressive courtyards and famous HELDENPLATZ, and visit awesome ST. STEPHEN’S CATHEDRAL. Tonight, you may join an optional evening out for dinner and a concert in one of Vienna’s many concert halls.

Vienna. Today is your chance to join an exciting optional excursion to Bratislava in Slovakia, or to just explore this magnificent city on your own. Enjoy a farewell dinner with Heurigen wine, the best way to say auf Wiedersehen, Wien!

Vienna. Your vacation ends with breakfast this morning.

"When you join me on a tour of Eastern Europe, you can discover our beautiful medieval towns and great national park, relax on the shores of the blue Adriatic while sipping a glass of wine from our vineyards, spend time with the friendly locals, and learn about our culture, hospitality, folklore, and lively music." 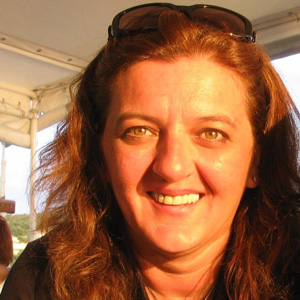