The Best of Eastern Europe (RO)

14 Day Tour from Berlin to Berlin

The Best of Eastern Europe

14 Day Tour from Berlin to Berlin

When you think of an Eastern Europe vacation, what comes to mind? Perhaps it's visiting old churches and seeing historical sites that have been standing for many centuries. Perhaps you think of visiting cities bombed in World War II and restored to their former splendor. Or maybe you think of learning about the counties’ rich histories. If so, this Best of Eastern Europe tour includes all of that and more with overnights in Berlin, Warsaw, Krakow, Budapest, Vienna, and Prague.Your guided sightseeing in the capitals includes the must-see attractions. Visit Berlin’s Kaiser Wilhelm Memorial Church, today a symbol of reconciliation; the medieval Old Quarter and the 14th-century Cathedral of St. John in Warsaw; St. Stephen's Cathedral in Vienna; Prague’s Hradčany Castle grounds and Astronomical Clock, built in 1410; the Kazimierz Quarter and St Mary’s Church in Krakow; and Budapest’s 13th-century Matthias Coronation Church, the coronation spot of several Hungarian monarchs. You'll also visit Jasna Góra, the monastery near Czestochowa, an important pilgrimage site. Its Black Madonna, a painting of the Virgin Mary, is a symbol of the country and venerated as the "Queen of Poland." You'll stop in Auschwitz to visit what is left of the concentration camp. Plus, Globus has arranged some special experiences in some of the smaller towns. You'll enjoy a special lunch in Telc, one of the most beautiful towns in the Czech Republic, and taste a Trdelnik rolled pastry in Prague. All of this and more—including a private Chopin concert in his hometown of Warsaw—are included on this fabulous Eastern Europe tour. 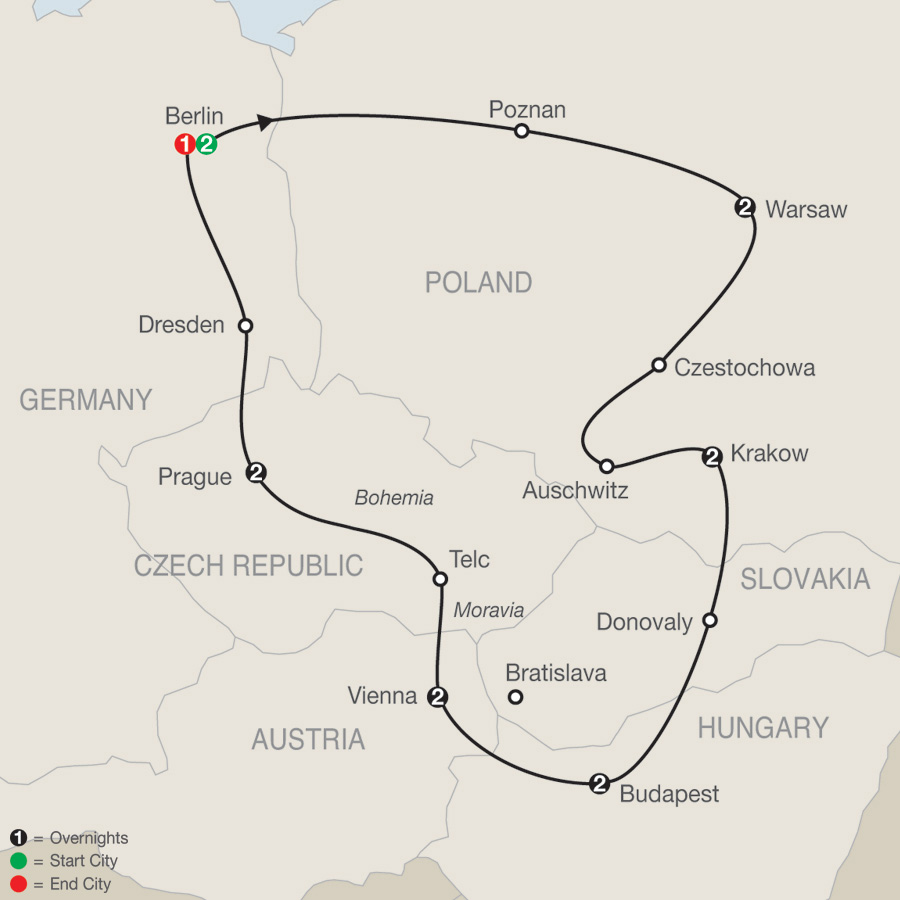 Motorcoach. Free Wi-Fi available on your motorcoach and in most hotel lobbies.

Full buffet breakfast daily; 1 lunch in Telc; 5 three-course dinners, including a farewell dinner at a local restaurant in Berlin

ARRIVE IN BERLIN, GERMANY. Welcome to Berlin! At 6 pm, meet your Tour Director and traveling companions for a welcome dinner at your hotel.

BERLIN. Sightseeing with a Local Guide in the once divided metropolis includes the fabulous boulevard Unter den Linden with its historical buildings like the Berlin Cathedral and State Opera House. See Museum Island, a picture stop at monumental Brandenburg Gate, the restored Reichstag, the 210-foot Victory Column in the vast Tiergarten Park, Charlottenburg Palace, and the elegant Ku-Damm. Visit the KAISER WILHELM MEMORIAL CHURCH with its bomb-damaged bell-tower, have a picture stop at the Holocaust Memorial, and pass the former Allied Checkpoint Charlie. Why not join an optional excursion to historic Potsdam?

BERLIN–POZNAN, POLAND–WARSAW. Cross the Polish border, enjoy vistas of rural life in the fertile central plains, and take a break in historic Poznan on your way to Warsaw, capital of Poland.

WARSAW. Your Local Guide will tell you about the tormented, often tragic history of this important gateway city between East and West. See the medieval Stare Miasto (Old Quarter) with its market square and 14th-century CATHEDRAL OF ST. JOHN, the “wedding cake” Palace of Culture and Science, neoclassical Lazienki Palace, and the remnants of the Jewish ghetto. Later, a special treat: [LF] attend a PRIVATE CHOPIN CONCERT.

WARSAW–CZESTOCHOWA–AUSCHWITZ–KRAKOW. A fascinating morning: visit JASNA GÓRA, the monastery near Czestochowa, and admire its BLACK MADONNA, which is venerated as the “Queen of Poland” and has become the country’s national symbol. In Auschwitz, visit what is left of the CONCENTRATION CAMP, a chilling reminder of the Holocaust. Evening arrival in Krakow.

KRAKOW. In the morning, an optional excursion to the Wieliczka salt mines is available. Later, guided sightseeing of ancient Krakow features a walking tour of the KAZIMIERZ QUARTER, with its cosy art cafes, antique shops, and galleries. Also stop for pictures at the impressive Wawel Castle, and visit the 14th-century ST. MARY’S CHURCH with its uneven towers. Tonight, why not join an optional Polish dinner and folklore show?

KRAKOW–DONOVALY, SLOVAKIA–BUDAPEST, HUNGARY. Drive through the scenic heart of mountainous and densely wooded Slovakia, where brown bears still roam free, via Donovaly, a popular skiing resort in the Tatra Mountains, to Budapest, proud capital of Hungary. This evening, you may wish to join an optional private dinner cruise on the Danube River, the perfect introduction to this fascinating city.

BUDAPEST. Eastern Europe’s most cosmopolitan city comes to life during your guided sightseeing. See elegant Andrassy Avenue, the Thermal Baths, and the world’s second-largest Jewish synagogue. From the lacy lookout towers of Fishermen’s Bastion, enjoy a panoramic view of the sprawling city. Then, visit the 13th-century MATTHIAS CORONATION CHURCH and Heroes’ Square. Tonight, a delectable optional Hungarian specialty dinner can be arranged.

BUDAPEST–VIENNA, AUSTRIA. Drive through the Hungarian plains to Vienna, once the center of the mighty Habsburg Empire. Meet your Local Guide and start your sightseeing with vistas of Prater park with its giant Ferris wheel. Drive along the elegant Ringstrasse past the impressive State Opera House, the Jewish quarter, and stop at the Hofburg Palace, winter residence of the Austrian imperial family. Marvel at the impressive courtyards and famous HELDENPLATZ, and visit awesome ST. STEPHEN’S CATHEDRAL.

AT LEISURE IN VIENNA. A whole day at leisure offers you the opportunity to join exciting optional excursions to the capital of Slovakia, Bratislava, and a concert in one of Vienna’s concert halls, or to just wander around the city at your own pace.

VIENNA–TELC, CZECH REPUBLIC–PRAGUE. Cross the Czech border and enter Moravia. Stop in one of the most beautiful towns in the Czech Republic, [LF] Telc, a UNESCO World Heritage Site, where a light lunch with local specialties has been prepared. Enjoy views of the rich farmlands of Moravia and Bohemia on your way to Prague. Tonight is your chance to join an optional outing to explore Prague by night. (B,L,D)

PRAGUE. Guided sightseeing includes a visit to the HRADČANY CASTLE GROUNDS, which afford lovely views of St. Vitus Cathedral and the castle’s walls and bastions. Originally laid out in the 16th-century, the grounds reached the present park-like form in the early 20th-century. Also see the Old Town, the Jewish ghetto, and the ASTRONOMICAL CLOCK, once the envy of all Europe. And of course, you will [LF] taste a Trdelnik, the famous rolled pastry topped with sugar and walnut mix. Balance of the day at leisure.

PRAGUE–DRESDEN, GERMANY–BERLIN. Re-enter Germany and stop in Dresden, the former capital of Saxony. Badly damaged by Allied bombing in February 1945, the city has since been restored to its baroque splendor. During your walking tour, admire the architecture of the Zwinger Palace and Semper Opera. Return to Berlin, where a farewell dinner awaits at a local restaurant.

BERLIN. Your vacation ends with breakfast this morning.

"See the most vibrant part of Europe and let me show you the "other side" of the Old Continent-where the borders are still shifting, where history has been rewritten, and the "bad boys" turned good overnight after the fall of the Berlin Wall and the Iron Curtain." 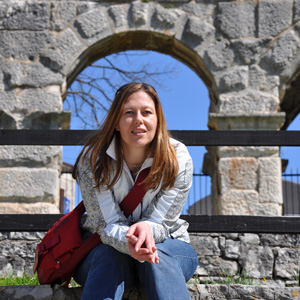