13 days from Warsaw to Munich

13 days from Warsaw to Munich

This World War II tour in Poland and East Germany is the perfect vacation for those who are interested in World War II. Your tour starts in Warsaw and ends in Munich. Along the way, you’ll visit cities, concentration camps, and places important during World War II—with overnights in Warsaw, Krakow, Wroclaw, Dresden, Berlin, Weimar, Nuremberg, and Munich.Throughout this tour, you’ll visit some of the concentration camps used during World War II. Visit Auschwitz and Birkenau, where you’ll see chilling reminders of the Holocaust, as well as the Buchenwald concentration camp near Weimar. Constructed in 1937, it was one of the largest concentration camps. You'll also visit the site of the former Dachau concentration camp, which started out as a work camp for German dissidents. In Krakow, you'll visit the Oskar Schindler Factory, a museum devoted to the wartime experiences in Krakow and made famous in the movie Schindler's List. You'll visit the Memorium Nuremberg Trials and Courtroom 600 (if available), where you’ll learn about the background and repercussions of the trials at the original location where they were held. You'll also visit the Documentation Center and Zeppelin Field, where thousands of people gathered for Nazi rallies. These experiences are some of the special inclusions Globus offers to ensure your vacation is unique.World War II brought devastation to the cities that were bombed, and you'll visit some of those cities. In Dresden, enjoy a guided walking tour of this city that was badly damaged by Allied bombing in February 1945 and has since been restored. In Berlin, visit the Kaiser Wilhelm Memorial Church, a symbol of reconciliation. All of this and much more are included in this fabulous World War II tour in Poland and East Germany.

GET A QUOTE
Save 7.5% per person on select 2020 Globus Europe, South & North America vacations*

*Book and deposit a 2020 Globus Europe, South or North America (excluding 2020 Oberammergau and Escapes by Globus) vacation to save 7.5% per person on the land-only portion of the core tour not including extra night accommodations, extensions, taxes, fees, tips or supplements. Booking must be made and under deposit between December 3, 2019 to January 28, 2020 for travel in 2020. Offer is combinable only with the Welcome Back Credit and any applicable air credits. Not applicable to custom tours. Discount will apply to individual members of groups adding a name and non-refundable per person deposit WITHIN the promo window. Not applicable on TBA space. Applies to new 2020 bookings only. Offer reliant on space availability. Full cancellation penalties will apply. Additional restrictions may apply. May be withdrawn any time. Available from participating GFOB office only. 20EBDB 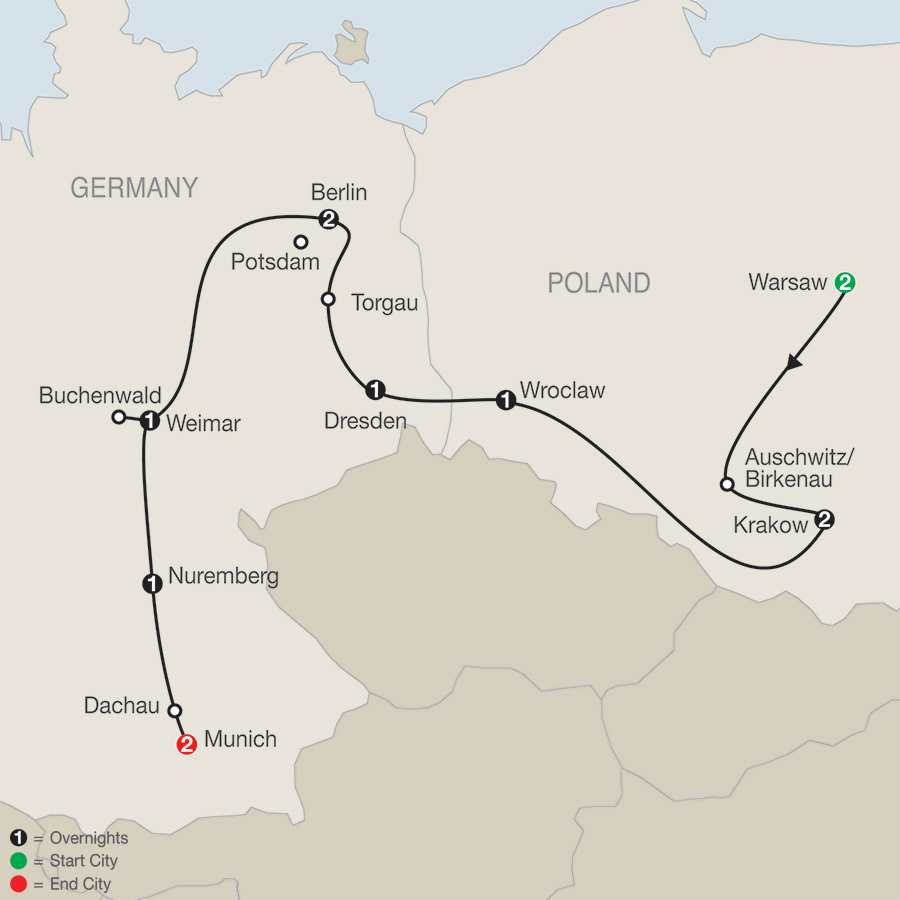 Motorcoach. Free Wi-Fi available on your motorcoach and in most hotel lobbies.

Full buffet breakfast daily; 7 three-course dinners with wine, including a special welcome dinner in Warsaw, special dinners in Dresden and Nuremberg, and a farewell dinner in Munich.

Arrival in Warsaw, Poland. Welcome to Warsaw! At 6 pm, meet your Tour Director and traveling companions, and leave the hotel for a special welcome dinner with wine at one of Warsaw’s excellent restaurants.

Warsaw. Your Local Guide will tell you about the tormented, often tragic history of this important gateway city between East and West. See the medieval Stare Miasto (Old Quarter) with its market square and 14th-century CATHEDRAL OF ST. JOHN, the “wedding cake” Palace of Culture and Science, neoclassical Lazienki Palace, and the remnants of the Jewish ghetto. An optional excursion to the Royal Castle is available.

Warsaw–Auschwitz/Birkenau-Krakow. Visit Auschwitz and Birkenau, and see what is left of the CONCENTRATION CAMPS, chilling reminders of the Holocaust and the most notorious among the World War II concentration camps. Then, continue to Krakow, for centuries the residence of Polish kings.

Krakow. This morning, there is a chance to join an optional excursion to the Wieliczka salt mines. Back in Krakow, [LF] follow your Local Guide for a stroll through Kazimierz, the old Jewish quarter; a visit to the REMUH SYNAGOGUE; and a visit to the OSKAR SCHINDLER FACTORY, made famous in the movie Schindler’s List. How about tonight’s optional Polish dinner and folklore show?

Krakow–Wroclaw. Your sightseeing with a Local Guide in ancient Krakow features the Market Square, 14th-century Jagiellonian University, and ST. MARY’S CHURCH. Take pictures of impressive Wawel Royal Castle. Next is Wroclaw, historical capital of Silesia. This impressive city belonged over the ages to Bohemia, Austria, Prussia, Germany, and (after 1945) to Poland. Hear about its turbulent history during your guided tour, and admire its highlights, such as the CATHEDRAL and the MARKET SQUARE with its fine patrician houses.

Wroclaw-Dresden, Germany. Cross the border and arrive in Dresden, former capital of Saxony. Badly damaged by Allied bombing in February 1945, the city has since been restored to its baroque splendor. During your guided walking tour, visit the Zwinger Palace COURTYARD to admire its impressive architecture; the magnificent baroque Semper Opera, originally built in 1841, once destroyed by fire, then destroyed by bombing, and finally restored in 1985; and the newly rebuilt Frauenkirche. Afterwards, [LF] a great dinner with wine and local specialties awaits you in Dresden’s well-known Am Pulverturm restaurant.

Dresden-Torgau-Berlin. Hear about Joe Polowsky on your way to Torgau, then [LF] see the monument commemorating the meeting of US and Soviet forces during World War II, and visit the COURTYARD at magnificent Hartenfels Castle. Continue to Berlin, capital of reunited Germany. Sightseeing with a Local Guide in the once-divided metropolis includes the elegant Ku’damm, the restored Reichstag, Charlottenburg Palace, a picture stop at monumental Brandenburg Gate and the Holocaust Memorial, and the 210-foot Victory Column in the vast Tiergarten park. Visit the KAISER WILHELM MEMORIAL CHURCH with its bomb-damaged tower, drive along Unter den Linden boulevard, and pass the State Opera House and Checkpoint Charlie.

At Leisure in Berlin. All day at leisure to further explore this fascinating city and to join an optional excursion to Potsdam.

Berlin–Weimar. Excursion to Buchenwald. In Weimar, follow your Tour Director for a pleasant walk through this pretty town. See the houses where great poets like Goethe and Schiller lived and the theater where the Weimar Constitution was drafted. In the afternoon, a special visit has been included to Buchenwald at the site of the former Buchenwald CONCENTRATION CAMP. Return to Weimar.

Weimar-Nuremberg. Arrive in Nuremberg and [LF] visit the MEMORIUM NUREMBERG TRIALS and COURTROOM 600 (if available), followed by visits to the impressive DOCUMENTATION CENTER and ZEPPELIN FIELD. In the afternoon, walk through the pedestrian area of the charming Old Town, known for children’s toys and gingerbread. Admire the impressive medieval ramparts; St. Sebald Church, painstakingly reconstructed as a monument to peace from the rubble of near-total wartime destruction; and the Schöner Brunnen, a 14th-century fountain dedicated to the Holy Roman Empire. It is said that it brings good luck to spin the two brass rings. Tonight, a [LF] special dinner to taste the traditional Nürnberger Bratwürste has been prepared for you at Bratwurst Röslein restaurant.

Nuremberg-Dachau-Munich. Visit the site of the former Dachau CONCENTRATION CAMP, which started out as a work camp for German dissidents. Then, continue to Munich, Bavaria’s capital. Explore MARIENPLATZ with the Old and New Town Halls, and the gothic Frauenkirche.

Munich. Today is your chance to join an optional excursion to spectacular Berchtesgaden and Hitler’s Eagle’s Nest (available only from mid-May to end-September and weather-permitting). This evening, a farewell dinner has been prepared to say auf Wiedersehen to your travel companions and to share your feelings about this exciting and emotional encounter with World War II.

Munich. Your vacation ends with breakfast this morning.

"I enjoy sharing insights about the always-changing countries of Central Europe. What I like just as much, if not more, is the camaraderie that guests form. With each tour, I am astonished by this. A group of strangers at the start, they get acquainted with each other in a pleasant way and sometimes take home friendships for life. I think it is great this takes place while exploring new regions and discovering new cultures." 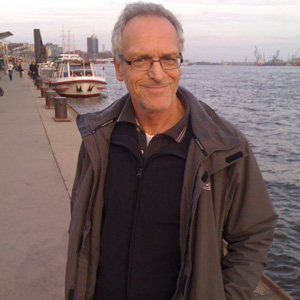