12 Day Tour from Nairobi to Nairobi

12 Day Tour from Nairobi to Nairobi

On this magnificent Kenya safari, visit remarkable national parks and wildlife reserves in search of giraffe, cheetah, zebra, leopard, lion, elephant, rhino, gazelle, hyena, Cape buffalo, and more—all in their native environments. Imagine the thrill of seeing these majestic animals as they sunbathe on grassy land and roam across the vast savannah grassland. And with no more than 6 guests per vehicle and 20 guests total in each group you’ll experience distinguished service by your professional Tour Director and experienced Driver/Guide.Your safari adventure starts in Samburu National Reserve, where you’ll have the chance to see rare animals not spotted in other parts of Kenya. Commonly referred to as the Samburu “Special 5,” they include the Grevy’s zebra, reticulated giraffe, Somali ostrich, Beisa oryx, and the gerenuk—a long-necked antelope that feeds while standing on its hind feet. Lion, cheetah, elephant, and Nile crocodile are also commonly spotted here. You’ll also spend two nights in Maasai Mara National Reserve, Kenya’s most famous game area. In addition to several game drives here, you will also enjoy an exclusive bush breakfast—a unique experience offered by Globus! In Nairobi, you’ll visit the Giraffe Center focused on saving the Rothschild’s giraffe; the Karen Blixen Museum, dedicated to the author of Out of Africa; and the Sheldrick Elephant Orphanage, an acclaimed project that rehabilitates orphaned elephant and rhino calves and reintroduces them to the wild. Here, meet the cute babies and learn about important conservation efforts. Other highlights include Ol Pejeta Conservancy, the largest black rhino sanctuary in East Africa, and Amboseli National Park, known for its large elephant population and spectacular views of Mount Kilimanjaro. All of this and more await you on this amazing Africa safari vacation!

GET A QUOTE
Save 5% on select 2021 Globus Asia, Africa and South Pacific vacations*

Save 5% on select 2021 Globus Asia, Africa and South Pacific vacations*

*Book and deposit a 2021 Globus Asia, Africa and South Pacific vacation (Excluding Escapes by Globus) to save 5% per person on the land-only portion of the core tour not including extra night accommodations, extensions, taxes/fees tips or supplements. Booking must be made, under deposit and discount applied between August 20, 2019 and April 26, 2021 for travel in 2021. Offer is combinable only with the Welcome Back Credit and any applicable air credits. Offer reliant on space availability. Applies to new bookings only. Full cancellation penalties will apply. Additional restrictions may apply; see Travel Terms & Conditions for details. May be withdrawn at any time. Available from participating GFOB offices only. 21EBDA 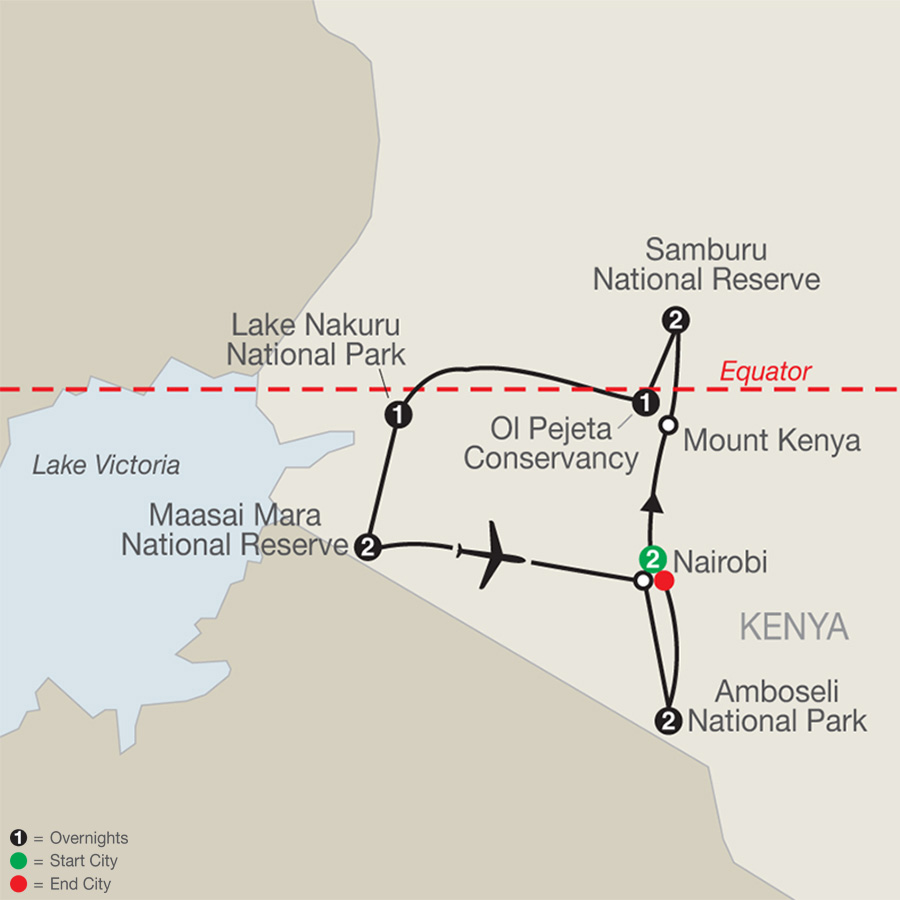 Sightseeing vehicle in Nairobi. 4-wheel drive safari vehicle, between destinations and for game drives, with a pop-up roof for easy game viewing and photography. We limit each safari vehicle to a maximum of 6 people, ensuring you’ll always have a window seat.

NAIROBI. Start your PRIVATE SIGHTSEEING with a visit to the SHELDRICK ELEPHANT ORPHANAGE, founded and managed by Daphne Sheldrick. Here, you will learn about elephant conservation and meet elephant calves, orphaned by poachers, before they are re-introduced to the wild. Next, visit the KAREN BLIXEN MUSEUM, dedicated to the author of Out of Africa. Lastly, stop at the GIRAFFE CENTER, a non-profit organization focused on saving the Rothschild’s giraffe, where you will learn about this sub-species and have the opportunity to feed them.

NAIROBI–MOUNT KENYA–SAMBURU NATIONAL RESERVE. Today, depart Nairobi to begin your search for the “Big 5”—lion, leopard, elephant, rhino, and Cape buffalo. First, stop at the famed Mount Kenya Safari Club for lunch and stunning views of Mount Kenya. After lunch, continue to SAMBURU NATIONAL RESERVE, known for its arid landscape and unique wildlife. Due to the dry climate, grasses are sparse, making animals easier to spot. Meanwhile, the Ewaso Ng’iro River, which borders the reserve, provides a year-round water supply. These two factors make for a great game-viewing experience. During your AFTERNOON GAME DRIVE, you have the chance to see rare animals you will not see in other parts of the country. Commonly referred to as the Samburu “Special 5,” this includes Grevy’s zebra, reticulated giraffe, Somali ostrich, beisa oryx, and the gerenuk, a long-necked antelope that feeds while standing on its hind feet.

SAMBURU. Today, enjoy MORNING & AFTERNOON GAME DRIVES. In addition to the Samburu “Special 5,” the reserve is home to an abundance of other species. Large numbers of elephant and Nile crocodile can be seen, as well as waterbuck, Kirk’s dik-dik, and Grant’s gazelle. Where there is prey, predators can be found, so lion and leopard are often spotted. The reserve is also a great place for bird watching, with over 300 species. Between game drives, there’s time to relax at your lodge.

SAMBURU–OL PEJETA CONSERVANCY. After breakfast, travel to OL PEJETA CONSERVANCY, the largest black rhino sanctuary in all of East Africa. After lunch, enjoy a GAME DRIVE in the conservancy, including a stop at the [LF] CHIMP SANCTUARY. In partnership with the Kenya Wildlife Service and the Jane Goodall Institute, the sanctuary was established to provide a long-term home for orphaned and abused chimpanzees. Here, see the chimps and learn more about their plight.

OL PEJETA–NYAHURURU FALLS–LAKE NAKURU NATIONAL PARK. A final GAME DRIVE in the conservancy before driving to LAKE NAKURU NATIONAL PARK. The journey takes you through the beautiful Kenyan highlands, one of the most fertile agricultural areas in all of Africa, where farmers grow crops such as corn, wheat, coffee, and tea. Stop for lunch at Aberdare Country Club en route.

LAKE NAKURU. Today, embark on MORNING & AFTERNOON GAME DRIVES. The park is home to a variety of animals including giraffe, impala, Cape buffalo, flamingo, and striped hyena. This is also your best chance to see white rhino, which are commonly spotted here. Relax at your lodge between game drives.

LAKE NAKURU–MAASAI MARA NATIONAL RESERVE. This morning, depart for MAASAI MARA NATIONAL RESERVE, Kenya’s most famous game area. The “Mara,” as it is called by locals, is part of the Serengeti ecosystem and boasts a strong permanent population of game. When the Great Migration of wildebeest and zebra arrives, generally from August to early November, the population enlarges by almost 2 million. This provides a great food source for predators such as lion, cheetah, leopard, and hyena. After lunch at your lodge, set out on an AFTERNOON GAME DRIVE. As the sun sets, savor SUNDOWNER DRINKS and watch a [LF] TRADITIONAL MAASAI DANCE PERFORMANCE.

DinnerNOTE: The Great Migration is a natural event, and the arrival/departure of the migrating herds varies slightly year to year.

MAASAI MARA. Rise early for a MORNING GAME DRIVE. Be sure to watch for elephant, rhino, giraffe, topi, hyena, and much more. Afterward, a special [LF] BUSH BREAKFAST has been arranged for you. Sip on a mimosa as you savor every moment of the memorable experience! Return to your camp and relax prior to your AFTERNOON GAME DRIVE.

MAASAI MARA–NAIROBI–AMBOSELI NATIONAL PARK. After breakfast, board a plane for the quick flight to Nairobi. After a short break, drive to AMBOSELI NATIONAL PARK, best known for spectacular views of Mount Kilimanjaro, the highest mountain in Africa at some 19,341 feet. Enjoy your first GAME DRIVE this afternoon.

AMBOSELI. Today features MORNING & AFTERNOON GAME DRIVES. Amboseli offers you a great opportunity to get close to the mighty elephant. You might also spot Cape buffalo, zebra, wild dog, and more. During the heat of the day, relax at your lodge or camp.

AMBOSELI–NAIROBI–DEPARTURE. Today, drive back to Nairobi, where tour ends. We have reserved a day room at the Ole Sereni Hotel for you to use prior to your homebound flight. Book home bout flights after 5pm.

"Join me as we embark on a journey through this unique country. From the bustle of Nairobi to the wilderness and bush of our national parks and reserves, there are many reasons why Kenya is one of the most popular destinations in Africa. I am honored to have the opportunity to share with you my passion about Kenya, and I'm delighted to guide you through such a spectacular destination!" 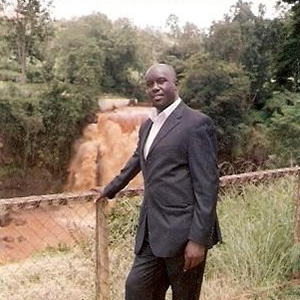