Your off-season guided tour of Jordan begins in the capital city of Amman and concludes at the Dead Sea—one of the lowest spots on Earth. Marvel at Jordan’s many amazing sites, but without the crowds or prices of the busy season! Visit Amman—one of the world’s oldest continuously inhabited cities with a history spanning nine millennia—to see the Roman amphitheater and Jerash, a well-preserved Greco-Roman city buried for centuries under desert sands. Enjoy a guided sightseeing of the UNESCO World Heritage Site of Petra—one of the New 7 Wonders of the World. Walk down the Siq, a narrow gorge with spectacular colors between its high cliffs, and stand in awe of the famed Treasury site, carved out of the sheer sandstone cliff in the 1st century BC. Sip tea in a real Bedouin tent—a tradition of the semi-nomadic Bedouin people still inhabiting this region.Take an adventure on a four-wheel drive in the desert of Wadi Rum, virtually untouched by humanity with its incredible landscape, monolithic rockscapes, and centuries-old paintings spread on the rocky outcrops. You'll also visit Kerak, and its 12th-century Crusader Castle; Wadi Mujib, the "Jordanian Grand Canyon;" Madaba with its archaeological museum and St. George’s Church, home to a 6th-century mosaic map of the Holy Land; Mount Nebo, the holy site where Moses saw the Promised Land; Bethany Beyond the Jordan, where Christians believe Jesus was baptized by John the Baptist; and the Dead Sea. All of this, minus the crowds and cost of high-season, awaits you on this one-week guided tour of Jordan! 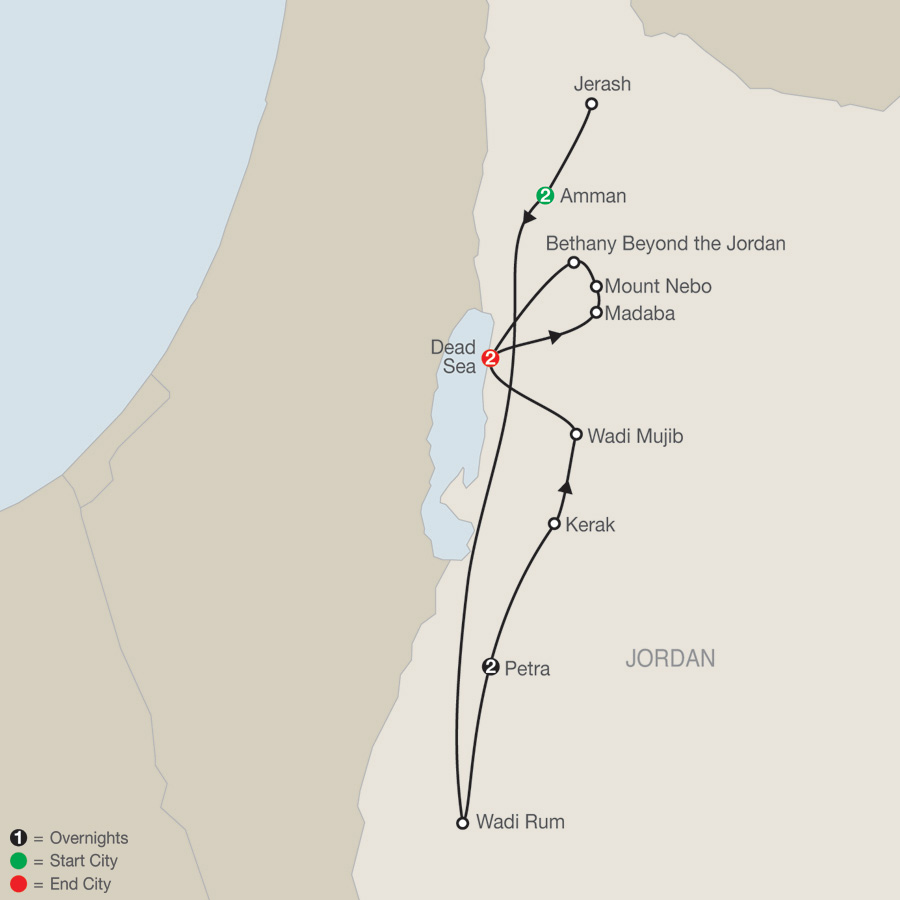 AMMAN Welcome dinner; guided sightseeing, visit the amphitheater; excursion to Jerash WADI RUMVisit the largest wadi in Jordan and [LF] enjoy a four-wheel drive to the desert of Wadi Rum and receive a local scarfPETRAGuided sightseeing, including [LF] the Siq and the Treasury; sip tea in a Bedouin tentKERAKVisit the Crusader CastleWADI MUJIBVisit the Jordanian Grand CanyonMADABAVisit St. George’s Church and the Archaeological MuseumMOUNT NEBOVisit the mountain where Moses saw the Promised LandBETHANY BEYOND THE JORDANVisit the site of John the Baptist’s settlementDEAD SEAFarewell dinner


Motorcoach or minibus; four-wheel drive. Free wi-fi available on your motorcoach and in most hotel lobbies.

Full buffet breakfast daily; 6 three-course dinners: including a welcome dinner in Amman, and a farewell dinner at the Dead Sea

ARRIVE IN AMMAN, JORDAN. Arrive at Amman Airport and transfer to your hotel. Balance of the day is at leisure. Enjoy this evening’s welcome dinner with your traveling companions, hosted by your Tour Director.

AMMAN. EXCURSION TO JERASH. Start this morning with guided city sightseeing of Amman and a visit to the ROMAN AMPHITHEATER. Later, travel to JERASH, which was inhabited as early as 3200 BC. Although the city was impacted by the earthquake of 749 AD, it is the site of the best preserved Greco-Roman ruins in the Middle East.

AMMAN–WADI RUM–PETRA. An exciting visit to Wadi Rum is on the program today. Wadi Rum is the largest wadi (ravine) in Jordan and made famous through the movie Lawrence of Arabia. Enjoy a spectacular [LF] FOUR-WHEEL DRIVE through the sand dunes and receive a keffiyeh, a local headscarf. Continue to the “Rose-Red City” of Petra, where you can relax at your hotel this evening or explore the ancient city.

PETRA. A day of guided sightseeing in Petra, a UNESCO World Heritage Site and one of the New7Wonders of the World®. Lost to the world for centuries, Petra is located in the biblical land of Moab. Enjoy an unforgettable experience as you walk down the SIQ, the narrow gorge made famous in the movie Indiana Jones and the Last Crusade. Stand in awe in front of the iconic and famed TREASURY. See spectacular temples and tombs created out of the rose-colored sandstone, and sip tea in a real BEDOUIN TENT. An optional excursion is available.

PETRA–KERAK–WADI MUJIB–DEAD SEA. This morning features Kerak, with a visit to the CRUSADER CASTLE and Wadi Mujib, the “Jordanian Grand Canyon.” Continue to your hotel at the Dead Sea for your 2-night stay.

DEAD SEA. EXCURSION TO MADABA, MOUNT NEBO & BETHANY BEYOND THE JORDAN. A fascinating day awaits! Stop in Madaba to visit ST. GEORGE’S CHURCH, which houses a precious 6th-century mosaic map of the Holy Land. Also explore the MADABA ARCHAEOLOGICAL MUSEUM. Today’s major highlight is a visit to MOUNT NEBO, where Moses saw the Promised Land. Next is Bethany Beyond the Jordan, where Christians believe that Jesus was baptized by John the Baptist.Back at the Dead Sea tonight, enjoy a farewell dinner with your traveling companions to celebrate an unforgettable journey.

DEAD SEA. Your vacation ends with breakfast this morning (the nearest airport is Amman).