13 Day Tour from Athens to Athens

13 Day Tour from Athens to Athens

Escape to the blue waters of the Mediterranean to explore Greece, Egypt, Israel, Cyprus, and Turkey by land and by sea. Begin in legendary Athens—site of Greek mythology, the first Olympians, and epic literature. Your off-season escape to Greece is packed with iconic historical sites, including Olympia’s Gymnasium, temples of Hera and Zeus, and other fascinating ancient ruins. Take in spectacular views of the sea on your way to Delphi. Enjoy a cooking demonstration and learn to make traditional tzatziki. Raise a glass of Ouzo while learning the dance of Zorba the Greek—the Sirtaki. Explore Delphi’s mountainside sanctuary of the god Apollo. Tour the archaeological excavations and museum, home to the extraordinary 5th-century-BC bronze statue of The Charioteer. Return to Athens to embark on your 7-night, 3-continent Mediterranean cruise. You’ll visit historic and cultural sites in Egypt, Israel, Cyprus Greece, and Turkey, while sailing on the glimmering Mediterranean Sea. Answer the riddle of the Sphinx and see the Great Pyramid of Giza, one of the 7 Wonders of the ancient world. In Cairo, peruse the treasures of King Tutankhamun. When docking at Ashdod (Israel) and Limassol (Cyprus), a selection of optional excursions are offered. In Rhodes, explore the Old Town with its ramparts and palaces, then head to Lindos to see the fabulous temple of Athena. Dock in Kusadasi to discover the amazing excavations of Ephesus that go back approximately 3,000 years. Return to Athens to visit the Acropolis, see the Parthenon, Temple of Athena Nike, and more. Join us to take advantage of fewer crowds and lower prices on this spectacular Greek vacation and Mediterranean cruise. 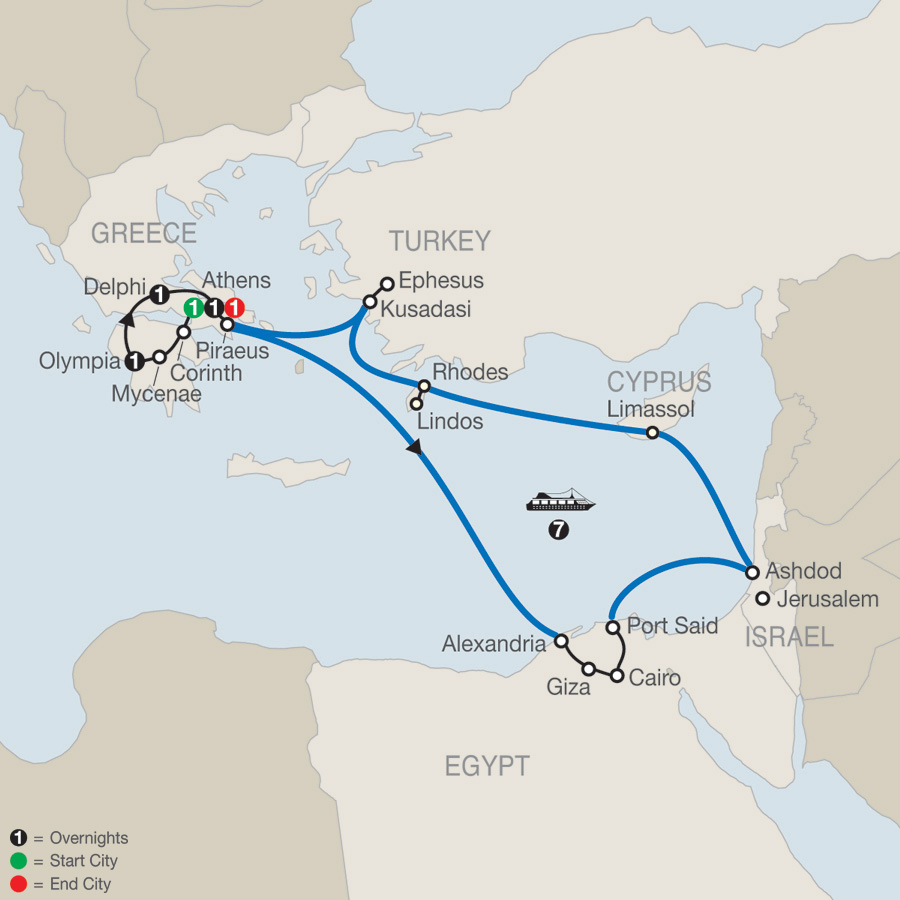 Motorcoach; cruise ship. Free wi-fi available on your motorcoach and in most hotel lobbies.

ATHENS, GREECE. Welcome to Athens! At 6 pm, meet your traveling companions for a welcome drink with your Tour Director.

ATHENS–CORINTH CANAL–MYCENAE– OLYMPIA. Today, cross the spectacular Corinth Canal, a project imagined in ancient Greece but only completed in 1893. Then, visit MYCENAE, the city described in Homer’s epics. Explore the excavations, including the Beehive Tombs (Treasury of Atreus); the Lion Gate, Europe’s oldest known monument; the remains of Agamemnon’s Royal Palace; and the impressive fortifications of the Citadel. Also visit the museum. Later, arrive in Olympia for a [LF] COOKING DEMONSTRATION and learn how to make traditional Greek tzatziki.

OLYMPIA–DELPHI. Sightseeing with a Local Guide provides insights and fascinating history about the original Olympic Games. Stroll among the awe-inspiring remains of the Gymnasium and the Temples of Hera and Zeus, and visit the MUSEUM with Praxiteles’ magnificent Hermes statue. Then, a scenic drive transports you to mystical Delphi for a fun evening featuring a glass of authentic ouzo and a festive [LF] DANCE LESSON to learn the sirtaki, made famous in the movie Zorba the Greek.

DELPHI–ATHENS. The morning is devoted to Delphi, the god Apollo’s mountainside sanctuary. Ancient Greeks once flocked here to seek advice from the world’s greatest oracle. Tour the EXCAVATIONS, and visit the ARCHAEOLOGICAL MUSEUM to admire the Charioteer, an extraordinary 5th-century-BC bronze statue. Later, return to Athens, where an optional dinner is available at a local restaurant.

ATHENS–PIRAEUS (EMBARKATION). Today head to the port city of Piraeus, where your cruise ship awaits to whisk you into the crystal-blue waters of the Aegean Sea.

CRUISING: AT SEA Time to relax and enjoy the ship’s facilities as you cruise towards Egypt. (B,L,D)

CRUISING: ALEXANDRIA, EGYPT-PORT SAID. A technical stop in Alexandria allows you to disembark for your included full day excursion. A guided tour takes you to see the PYRAMIDS OF GIZA including the Great Pyramid, the most colossal pyramid ever built and get close to the enigmatic SPHINX. Next, on to Cairo, capital of Egypt, set on the river Nile. Visit the NATIONAL ARCHAEOLOGICAL MUSEUM, home to over 120,000 artifacts including the treasures of Tutankhamun. Later return to the ship now docked at Port Said, the entrance to the Suez Canal. (B,L,D)

CRUISING: ASHDOD, ISRAEL. Arrive today in Ashdod, Israel’s largest port! A selection of optional excursions are available today to make the most out of your stay amongst which is a trip to Jerusalem and Bethlehem. (B,L,D)

CRUISING: LIMASSOL, CYPRUS. North today to Cyprus, with time to explore Limassol’s historical center on your own. You could investigate the thousand-year-old castle, medieval baths, catacombs, and fascinating Folk Art Museum, or you might prefer to just relax with a Cypriot beer at one of the many tavernas and mingle with the locals. (B,L,D)

CRUISING: RHODES, GREECE. The entire day is dedicated to the fabulous island of RHODES. First, explore the OLD TOWN with its ramparts and palaces built by the Knights of St. John during the Crusades. Then, head to the archaeological site at LINDOS to see the fabulous Temple of Athena. Be sure to bring your camera because the view of Lindos village sprawling down the hillside under the acropolis is one of the most iconic scenes in Greece! (B,L,D)

CRUISING: KUSADASI, TURKEY Dock on the southwestern coast of Turkey for a true highlight: the incomparable excavations of EPHESUS. At its zenith in the 1st century BC, it was one of the largest cities in the world, renowned as a trade center and for its colossal Temple of Artemis, Library of Celsus, and medical school. Led by an expert guide, wander among the reconstructed ruins, including the impressive 25,000-seat Great Theater, where the apostle Paul preached. The lavish monuments, frescoed houses, public baths and toilets, streets marked by chariot wheels, and ancient graffiti offer a true understanding of what life was like for the people who called Ephesus home. (B,L,D)

PIRAEUS (DISEMBARKATION)–ATHENS. After breakfast on board, disembark for a final day in Athens. Guided sightseeing introduces you to the world-famous ACROPOLIS. From its rocky hilltop setting, see the fabled Parthenon, Erechtheum with its Porch of Maidens, and the Temple of Athena Nike. Take in the incomparable views of the Temple of Olympian Zeus, Theater of Dionysus, and the Agora where Socrates taught. Later, a city orientation showcases the Parliament House and 2nd-century Panathenaic Stadium, the only stadium in the world built entirely of marble! The rest of the day is free to catch up on last-minute shopping or to explore more on your own. Tonight, you could join an optional dinner at a local restaurant.

ATHENS. Your vacation ends with breakfast this morning.