Germany is a country filled with spectacular scenery, medieval towns, fairytale castles, a fascinating history, and world-class beer. On this Germany tour, see Germany's highlights and visit its most famous cities, as well as medieval towns and scenic areas. Your vacation begins and ends in Frankfurt with overnights in Cologne Berlin, Dresden, Nuremberg, Munich, and the Black Forest. Visit the must-see attractions in each city, including the famous gothic cathedral in Cologne, with its twin-steeple towers, the Kaiser Wilhelm Memorial Church in Berlin, badly damaged during the war and today a symbol of reconciliation, and the Zwinger Palace Courtyard in Dresden. Enjoy traveling first-class on the high-speed ICE train to the capital, Berlin.Magnificent scenery awaits you on this Germany vacation. Enjoy a cruise along the most scenic section of the Rhine River, with castle-crested hills, terraced vineyards, and traditional wine towns. Take in views the Romantic Road’s charming villages and countryside before stopping for a walking tour in Rothenburg, a walled town that has retained its medieval character. Visit King Ludwig II's Neuschwanstein Castle, nestled high in the Alps. Drive on the panoramic German Alpine Road to beautiful Lake Constance, Europe's largest freshwater reservoir, and to the charming island of Lindau. Finally, arrive in Germany's lush Black Forest region, to learn about the art of woodcarving and taste the traditional Black Forest Cake—a special experience included by Globus.A tour to Germany would not be complete without sampling the local cuisine and beer. That's why Globus has arranged a beer at a famous brewery in Cologne, founded over 100 years ago. Bratwurst (sausage) has been a tradition in Nuremberg for many centuries, and Globus has organized a dinner at a local Nuremberg restaurant to taste the traditional Nürnberger Bratwürste.From the beautiful scenery and exciting cities to the traditional food and wonderful beer, this Germany tour has it all! 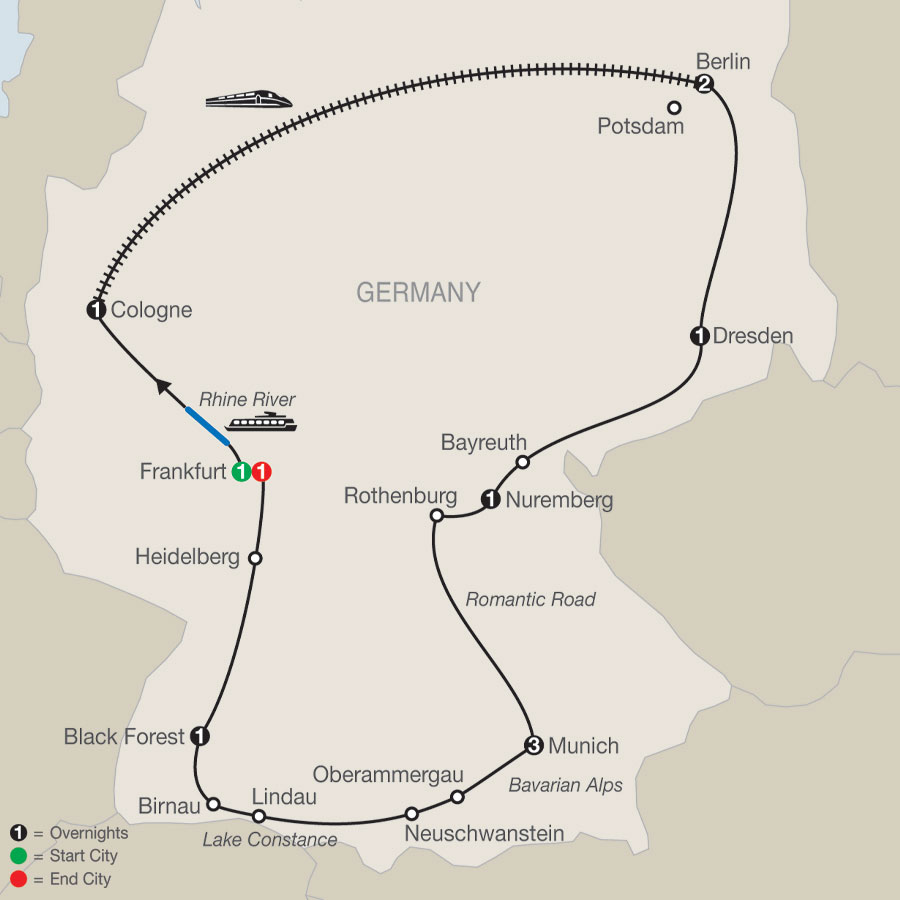 Full buffet breakfast daily; 7 three-course dinners, including dinners at a local restaurant in Frankfurt and Nuremberg

ARRIVE IN FRANKFURT, GERMANY. Time to rest or to start exploring the bustling metropolis on the Main River. At 6 pm, meet your Tour Director and traveling companions and leave the hotel for a welcome dinner at a local restaurant.

FRANKFURT–COLOGNE. A special treat at the very start of your journey through Germany is a romantic RHINE CRUISE along the most scenic section of the Rhine River. See castle-crested hills, terraced vineyards, pretty wine towns, and the Lorelei rock. Disembark and drive to Cologne to visit the monumental gothic CATHEDRAL. Its twin 515-foot towers, five naves, splendid stained-glass windows, and the shrine of the Three Holy Kings are eloquent testimony to medieval engineering and craftsmanship. Afterwards, join the locals for [LF] a beer at the Cölner Hofbräu Früh, one of Cologne’s famous breweries.Today’s Distance: 155 mi / 250 km

COLOGNE–BERLIN. Ride the ICE TRAIN to Berlin, capital of reunited Germany, where sightseeing with a Local Guide in the once-divided metropolis includes the fabulous boulevard Unter den Linden with its historical buildings, including the Berlin Cathedral, State Opera House, and Museum Island. Make a picture stop at monumental Brandenburg Gate, and see the restored Reichstag, the 210-foot Victory Column in the vast Tiergarten Park, Charlottenburg Palace, and the elegant Ku-Damm. Visit the KAISER WILHELM MEMORIAL CHURCH with its bomb-damaged bell tower, stop for pictures at the Holocaust Memorial, and pass the former Allied Checkpoint Charlie.Today’s Distance: 367 mi / 590 km

AT LEISURE IN BERLIN. Full day at leisure or join one of our optional excursions, such as a visit to nearby Potsdam.

BERLIN–DRESDEN. Arrive in Dresden, former capital of Saxony. Badly damaged by Allied bombing in February 1945, the city has since been restored to its baroque splendor. During your orientation, see the Zwinger Palace COURTYARD to admire its impressive architecture; the magnificent baroque Semper Opera, originally built in 1841, once destroyed by fire, then destroyed by bombing, and finally restored in 1985; and the newly rebuilt Frauenkirche.Today’s Distance: 137 mi / 220 km

DRESDEN–BAYREUTH–NUREMBERG. Discover Bayreuth, of festival fame. When Richard Wagner came to Bayreuth in 1871, he was not satisfied with the existing 18th-century Markgräfliches Opernhaus theater, so he had a new one built. Today, the Festival Hall is used exclusively for the Bayreuth Festival, and only works by Wagner are performed there. Continue to Nuremberg, the town of children’s toys and gingerbread. Admire the impressive medieval ramparts and walk through the pedestrian area of the charming Old Town. See St. Sebald Church, painstakingly reconstructed as a monument to peace from the rubble of near-total wartime destruction, and admire the Schöner Brunnen, a 14th-century fountain dedicated to the Holy Roman Empire. It is said that it brings good luck to spin the two brass rings. Then, have [LF] dinner at Bratwurst Röslein restaurant to taste the traditional Nürnberger Bratwürste.Today’s Distance: 205 mi / 330 km

NUREMBERG–ROTHENBURG–MUNICH. Prepare for Rothenburg—a picturesque, medieval walled town with ramparts and towers on the Romantic Road. Step back in time and follow your Tour Director for a walk to the main square with its Town Hall. Wander through the cobblestone streets and shop for Christmas ornaments, for which the town is famous, before continuing to the Bavarian capital, Munich. Tonight, you may wish to join an optional dinner outing.Today’s Distance: 205 mi / 330 km

MUNICH. Germany’s “Secret Capital” comes alive during your guided sightseeing. Admire the Olympic Stadium, built for the 1972 Olympics; the 1,000-foot-high Olympic Tower; and Königsplatz, used for Nazi rallies during World War II. Drive along the Ludwigstrasse, and see the Bavarian Arch of Triumph and Field Marshall Hall, a monumental loggia on the Odeonsplatz. Visit lively MARIENPLATZ with the Old and the New Town Halls and the gothic Frauenkirche.

AT LEISURE IN MUNICH. Enjoy a leisurely day, or choose from a range of optional excursions to make the most of your stay.

MUNICH–OBERAMMERGAU–NEUSCHWANSTEIN–LINDAU–BIRNAU–BLACK FOREST. Drive to Schwangau where two castles are facing each other: Hohenschwangau, where King Ludwig spent much of his youth, and magnificent NEUSCHWANSTEIN, the most famous in Germany and inspiration for Walt Disney’s Sleeping Beauty castle at his theme park. Follow your Local Guide through this fairytale castle on its craggy outcrop high above a sparkling lake. Then, continue along the panoramic German Alpine Road to the sunny northern shore of Lake Constance, Europe’s largest freshwater reservoir. Visit the charming island of Lindau and the baroque CHURCH at Birnau before entering the lush Black Forest. During dinner, traditional Schwarzwaldkuchen (Black Forest Cake) will be served.Today’s Distance: 242 mi / 390 km

BLACK FOREST–HEIDELBERG–FRANKFURT. This morning, enjoy the peaceful surroundings of your hotel and attend a WOODCARVING DEMONSTRATION, before continuing to Heidelberg, Germany’s oldest university town, of Student Prince fame. Time to stroll around in the Old Town, then ride the FUNICULAR up the hill and visit the red-walled CASTLE where the GREAT VAT, a 58,000-gallon 18th-century wine cask, attracts particular attention. Return to Frankfurt, where a farewell dinner has been prepared to say auf Wiedersehen!Today’s Distance: 199 mi / 320 km

FRANKFURT. Your vacation ends with breakfast this morning.

Escorting tours for more than 15 years

"I have had the privilege of being a Tour Director for many years and even after all this time, there is still so much to share. I believe traveling is a learning experience. You learn about places, cultures, history, and of course, yourself. When traveling through Central and Western Europe, I love to help my groups learn by sharing what I know with them. What I love most is what they share with me. At the end of the trip, I have the feeling we have enriched each other's lives."

"The role of a Tour Director is much more than organizing and planning. Each new group brings wonderful new people to meet and unique experiences to share. Thanks to this profession, I have the opportunity to show the beauty and treasures of different European regions and cultures with new friends along the way."

A comfortable hotel in typical Black Forest style, situated in a quiet park area within easy access from the B31 between Freiburg and Titisee. Nearby are mountain bike rentals, Black Forest cuckoo clock and glassblower's workshop with gift shop and St. Oswald's chapel, the oldest chapel of the Higher Black Forest.