Escape to the Caribbean coast of Costa Rica, reachable only by air or water, to explore Tortuguero National Park. As its name suggests, it is here where sea turtles like loggerheads and leatherbacks lay their eggs each year. Visit the Sea Turtle Conservancy, home to the Western Hemisphere’s largest green sea turtle nursery. Cruise the canals to spot fantastic creatures large and small that stalk, slither, and soar in this natural paradise of wildlife diversity. Depart by boat before driving to San José and pass pineapple and banana groves en route to the heart-stirring rainforest canopies of Arenal. Here, the hanging bridges stretch to heart-stirring heights through the rainforest canopy, while the depths of the earth deliver lava trails to follow. See Arenal Volcano and explore the wild places where pumas and jaguars prowl. Look skyward to spot the hundreds of multi-hued birds, butterflies, and a dizzying diversity of wildlife in the Monteverde Cloud Forest. Find your head in the clouds in a primeval forest blessed by trade winds, rain, and fog by day, and unfettered stars above by night. Go where monkeys and macaws make your day with mischief and count yourself charmed to see some of the 160-plus reptile species—from tiny amphibians to titan snakes. Get civilized too, with visits to an artisan village and a tour of Costa Rica’s largest city and cultural capital of San José. 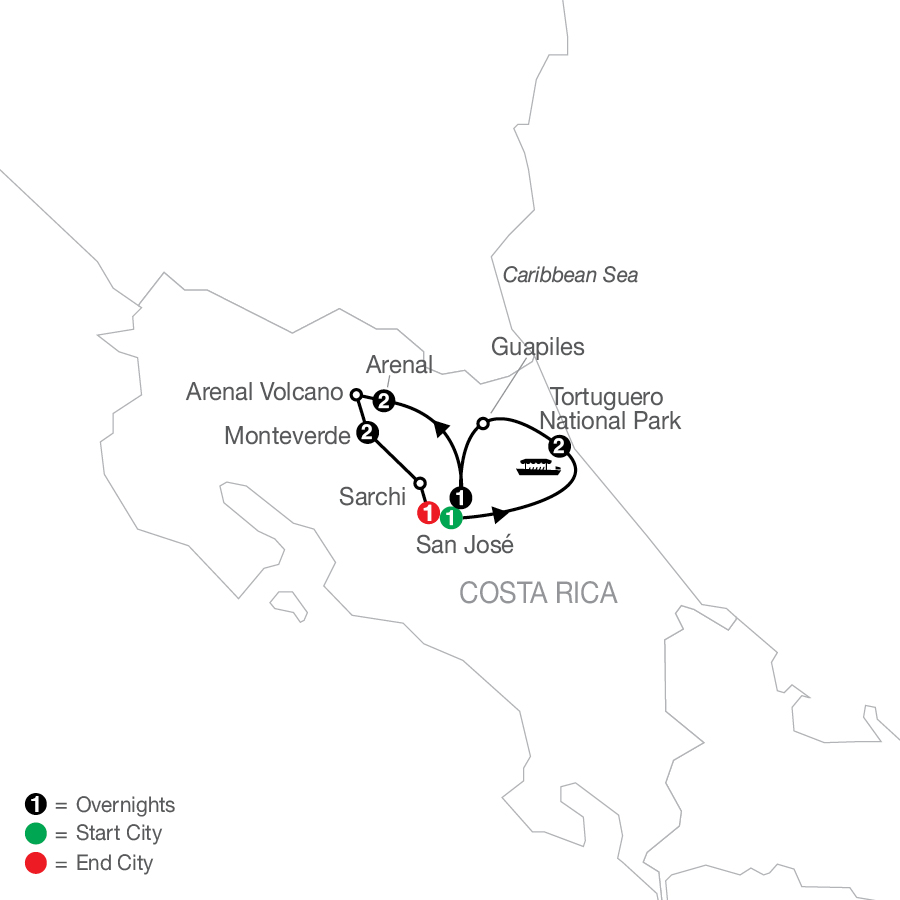 SAN JOSÉ–TORTUGUERO NATIONAL PARK Shell GamesJourney east to the Caribbean shore and Tortuguero National Park. On the way, pass by several banana plantations and see one of Costa Rica’s main exports being harvested. Later, board a motor launch for your cruise along the Tortuguero Canals, waterways crisscrossing a national park dedicated to the protection of endangered turtles. The trained eyes of your guide and boatman help you spot freshwater turtles, caimans, herons, toucans, egrets, and monkeys. Upon arrival, enjoy a welcome drink and briefing at your lodge before free time before dinner this evening.

DinnerTOUR HIGHLIGHTWONDERS OF NATURE Your time in Tortuguero National Park includes Naturalist-guided visits to the bio-diverse park—home to many species, including white-faced capuchin, howler, spider monkeys, toucans, macaws, tapirs, ocelot, manatees, and jaguars! The area is also famous as the annual nesting site for the five species of turtles.

TORTUGUERO NATIONAL PARK Natural BeautiesA local Naturalist accompanies you on a guided cruise of the remote yet extensive Tortuguero canals. Watch for abundant wildlife, including over 125 species of mammals, 124 species of reptiles, and over 375 species of birds. Return to the lodge for a nature walk into the rainforest with your Naturalist guide who explains the flora commonly found here and its uses. This afternoon, visit the small town of Tortuguero and visit the Sea Turtle Conservancy Museum in the protected nesting habitat and largest green turtle rookery in North America, as well as Hawksbill, Leatherback, Loggerhead, and Olive Ridley turtles.

DinnerTOUR HIGHLIGHT CONSERVATION MATTERS The Sea Turtle Conservancy Museum has been working with green turtles in Tortuguero since 1959, making it the world’s oldest sea turtle research and conservation group. Learn about sea turtle species that nest in Tortuguero, their life cycle, migratory routes, the research that was started in the early 1950s, and preservation efforts to help protect these endangered species.

Lunch TOUR HIGHLIGHT SCENIC RIDE Pass the plentiful fields of banana trees on your way to San José where the Costa Rican plantations produce this main export to the rest of the world.

SAN JOSÉ–ARENAL Lava LoveDepart on a scenic drive past banana groves and pineapple and sugar cane fields en route to Arenal. Visit to La Fortuna Village in the shadow of mighty Arenal Volcano (currently dormant but known for consistent lava flows before 2010). Arenal is home to cascading waterfalls, thriving rainforests, abundant wildlife, and a wealth of outdoor activities with nearby nature trails and 400-year-old trees. Watch for frogs, monkeys, birds, and native wildlife.

BreakfastTOUR HIGHLIGHTWONDERS OF NATURE For 42 years, Arenal Volcano was Costa Rica’s most active volcano until 2010 when entered a passive phase. This area is one of the most bio-diverse areas in the world and is home to more than 850 species of birds and other wildlife. Time here can be spent hiking the trails around the volcano or relaxing in the many thermal hot springs.

ARENAL Bird’s Eye View Today, take a guided excursion with your Naturalist to Arenal Hanging Bridges. Explore the jungle canopy atop 15 bridges suspended in the treetops to see various species of plants, birds, butterflies, monkeys, sloths, and other local wildlife. On a clear day, get a 360-degree view of the tropical rainforest and stunning views of Arenal Volcano. Free time the remainder of the day.

BreakfastTOUR HIGHLIGHTPICTURE PERFECT Explore the rainforest from a bird’s-eye perspective high above the jungle floor from the Arenal Hanging Bridges. This Naturalist-guided tour introduces you to the flora and fauna of the Costa Rican rainforest. With some bridges spanning over 700 feet long and 200 feet high, this is truly a unique way to admire the forest canopy.

ARENAL–MONTEVERDE Heads in the CloudsThis morning, depart Arenal on scenic drive to Monteverde for the next two nights. Arrive in the cloud forest of Monteverde, situated on the continental divide under misty cloud coverage in one of the world’s most bio-diverse areas. Enjoy an afternoon and evening at leisure.

BreakfastTOUR HIGHLIGHTWILD & WONDERFUL Explore Monteverde Cloud Forest, home to over 3,000 species of plants, 400 species of birds, 60 species of bats, 1,200 species of amphibians, and 700 species of butterflies in one of the last remaining natural habitats of all six Costa Rica wildcat species—ocelots, jaguars, jaguarundi, pumas, oncillas, and marguays. Perhaps you’ll catch a glimpse of one of Costa Rica’s most beautiful birds, the resplendent quetzal.

BreakfastTOUR HIGHLIGHTPARADISE FOUND This unique, high-elevation ecosystem of Santa Elena Cloud Forest Reserve is constantly enveloped in moisture-rich clouds formed from the warm winds from the Atlantic Ocean as they sweep over the Continental Divide, creating one of the most bio-diverse and rich ecosystems in the world. Prolific in many animal and plant species, this is a nature lover’s paradise.

BreakfastTOUR HIGHLIGHTSCULTURE & TRADITION Visit the local village of Sarchi and see firsthand how the traditional ox carts are hand-painted. Once used to transport coffee and sugarcane, these are now pieces of art with intricate designs.

"Born in San José, I developed an interest in knowing the different attractions, customs and traditions across beautiful Costa Rica. I have always enjoyed at the fullest what I do, so I share my passion with everyone. I like making new friends, being helpful, leading groups, sharing my knowledge of my home country, and always having a smile for people around me." 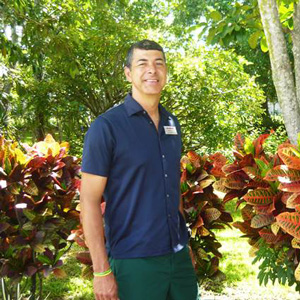 
* The "Starting at" or listed price is based on the lowest price available to book. Price is per passenger based on double occupancy and does not include airfare; additional fees/charges are not included. If a price is crossed out, the new price includes a limited time promotional offer(s) – please review current promotions or deals for additional information. Some tours require intra-vacation flights (and in some cases intra-vacation segments must be purchased from Globus).